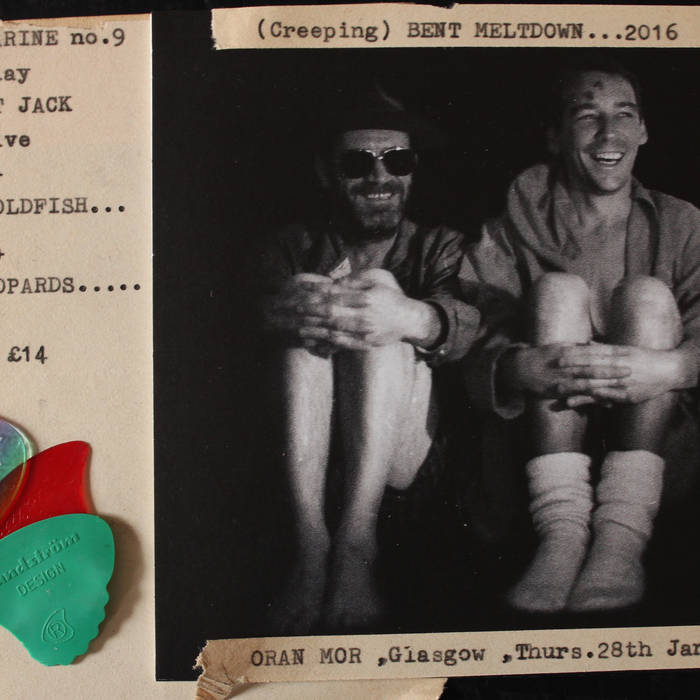 To celebrate turning 21 and getting the key to the door etc, Creeping Bent is presenting Bent Meltdown at Celtic Connections in Glasgow on Thurs 28th Jan16. If you can't make it, here is a FREE download of tracks by the three groups performing; The Nectarine No9, The Secret Goldfish, and The Leopards. Enjoy, pop friends.

THE NECTARINE No9
THE SECRET GOLDFISH
THE LEOPARDS
& surprises

The title of this show might seem to promise more discomfort than listening pleasure – but don’t be denied: it’s actually a reprise of a memorable night, back in 1998, when Glasgow’s then four-year-old Creeping Bent Organisation were invited by John Peel, as curator of that year’s Meltdown festival, to present a label showcase at London's Royal Festival Hall. Adventures in Stereo, The Nectarine No9, The Secret Goldfish, and The Leopards performed, with Jock Scot and Vic Godard in cahoots.

Reassembling for the occasion are three key acts of the time – The Nectarine No9, who’ll mainly be revisiting their recently-reissued 1995 Postcard Records' classic Saint Jack; underground pop outfit The Secret Goldfish, who last performed in 1999 and whose comeback album is due in 2016, and incendiary cult heroes The Leopards were last seen at Celtic Connections with Lloyd Cole in 2014.

The Nectarine No9 transmogrified into the Sexual Objects after the 5th NN9 album, I Love Total Destruction, was released via Beggars Banquet / Creeping Bent in 2004. Heavenly Records have just reissued the NN9 opus Saint Jack, with a package that includes two sessions they recorded for Peel. The Sexual Objects recorded a series of 7" singles, collected on a singlesgoingsteady LP called Cucumber. One copy of their new album, Marshmallow, exists.

Adventures in Stereo retreated to the shadows after their 2000 release, Monomania, and attendant US tour. After which, silence fell.

The Secret Goldfish released their second LP in 1999, and played their last gig the same year with Edwyn Collins and Vic Godard. However, a third album called Petal Split has finally been finished and will be released later this year.

The Leopards took a break after their 1997 album, They Tried Staying Calm, finally following it up with Never Been The Same in 2011. In the interim they recorded albums (and played live) with fellow Postcard alums; James Kirk, Paul Haig, Vic Godard, Malcolm Ross, expect a new Leopards LP later this year. Surf On !!!

BENT MELTDOWN (Redux) is nostalgia for an age yet to come. Distant echoes. The event is in association with Celtic Connections, following on from the Creeping Bent organised Pop Group / Sexual Objects performance for Celtic Connections in Jan 2014. The Bent Meltdown takes place at Oran Mor, Glasgow, on Thursday 28th January. Come early, doors are at 7pm and first group is on stage at 7.30pm sharp.

THE NECTARINE No9 - Saint Jack youtu.be/3cQQxl9Vfwg?list=PLmI8tsB_BktjnHcglSkLRbvwBhk_C61OI