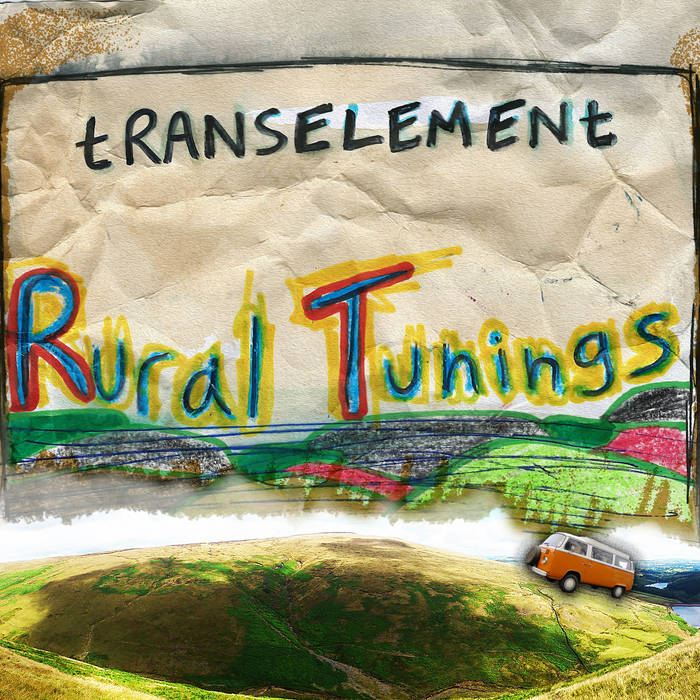 The Creeping Bent Organisation is delighted to finally release the debut album by Lancashire hotpots, Transelement. The group were formed at school in Nelson by Jay Stansfield and Karl Eden (vocals / guitars / synths) and Mark Tattersall (drums / machines / tapes), and soon started scraping together aural weirdness on a broken 4 track tape machine, which resulted in an experimental approach to making skewed pop. This is where they appeared on my radar, when a hand-coloured hand-designed cassette arrived through the letterbox of Creeping Bent H.Q. in Mount Florida, Glasgow.

The group went through several name mutations, at the time they were operational as Element, and sounded perfect with their distressed tape freeform attitudes. Their cassette arrived at Creeping Bent in the late 90’s, at the time the Bent roster consisted of Alan Vega & Revolutionary Corps of Teenage Jesus, The Leopards, The Nectarine No9, The Secret Goldfish, and Adventures in Stereo. We were too busy with the artists we were already working with to sign another group, as a label we were receiving considerable attention from John Peel on BBC Radio 1 with all of our groups recording Peel Sessions.

However, Transelement got their pop hooks in me, and it was agreed a track would be released on the Creeping Bent Singles Club. The track, Lord Aparts, was immediately picked up by John Peel and other turned-on members of the media. My craving could not be satisfied and it was decided to release a mini-album, Sour Blaster, which started connecting with a growing audience of weirdoids. John Peel invited the group to perform live at the legendary BBC Maida Vale studios in a live radio show where he celebrated five years of Creeping Bent, with Transelement going on to record two Peel Sessions. The group were assembling and amassing a considerable number of songs / albums and audio extracts, all recorded on their faulty 4 track machine. An album, Rural Tunings, was scheduled for release by Creeping Bent in 2001. Sadly, it was never released (for various reasons too abstract to deconstruct here).

Therefore it is with great pleasure that the Creeping Bent Organisation can now release Rural Tunings on 30th September. It is undoubtably one of my favourite Creeping Bent releases, I’m so pleased to be finally letting this album escape into the omniverse. Rural Tunings most reminds me of the quirky joy and beauty created by Oliver Postgate and Vernon Elliot, albeit delivered from the mushroom laden fields of rural Lancashire.

As a bonus, we have added the 8 songs from the group’s mini-album, ’Sour Blaster’, to the end of 'Rural Tunings’. Tune in, drop out.